Skip to primary navigation Skip to content Skip to footer

The loco arrived at Dartmoor Railway in November 2017 having retired from mainline duties, the loco is fitted with Electric Train Heating equipment which provides a supply to the coaching stock on the Railway to heat them in the colder months. Main use at Dartmoor Railway is during Special Events when it “Tops and Tails” our railways resident Mk1 and Mk2 coaches with either D4167 or 31285.

The loco is currently based at our sister the Weardale Railways and will arrive in Okehampton in April 2019.

D4167 is a class 08 0-6-0 diesel shunter, TOPS number 08937, named ‘Bluebell Mel’, although the nameplates are currently (Dec 2015) removed for repair.  Built in 1962 in Darlington, it has spent all its operational life in the South West, at Plymouth, Newton Abbot, Exeter or Meldon. It has dual brakes.

Lab 11 began life in 1951 as BR Mk1 Brake Second Corridor (BSK) S34249 at Ashford/Eastleigh, built to diagram 181, on lot number 30021. Initially it worked between London and Ramsgate then from 1963 it was part of a boat train from Waterloo to Southampton Docks connecting with the ferry to St Malo. It was withdrawn from revenue earning service in February 1970, and converted in June 1970 to QXX RDB 975046 ‘Laboratory 11’ to form part of the Tribology Test Train, with which it entered service in 1972.

It last ran in this guise in 1996, and was disposed of in 2004, arriving on the DR in Sept 2011 via the Great Central Railway. DRSA C&W volunteers have restored it to its original Research Division livery, getting it into service in spring 2015. The interior has been fitted out with tables and loose chairs, and as a dual-braked brake coach with a generator and a kitchen, Lab 11 is a very versatile vehicle.

61743 is the driving trailer (DMSO) from class 411 Southern Region 4-CEP electrical multiple unit 7178 (subsequently 1589), built in 1960 at Eastleigh to diagram 884. It is air braked. It currently carries the British Rail blue/grey livery.

It is planned that the following stock may be used later in the season with D4167:

Dartmoor Railway may, later in the season,  use 1132 a BR Southern Region class 205 diesel electrical multiple unit, commonly known as a ‘Thumper’ because of the distinctive noise of its 62 litre 4 cylinder English Electric 4SRKT engine. The set was renumbered 205032 when BR introduced TOPS. It was built in 1962; the underframes at Ashford and everything else at Eastleigh. It was used for commuter services in and around Berkshire until retirement from main network service in 2004. Originally it was a 3 car unit comprising DMBSO (power car) 60150, TSO (centre trailer) 60677 and DTCsoL (driving trailer) 60831, though it operates as a 2 car unit in Dartmoor Railway service without the unrestored TSO. 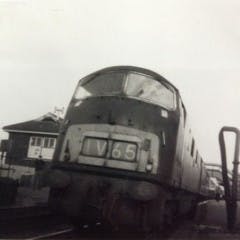 The Dartmoor Railway line is part of what was once the London South Western Railway main line from London Waterloo to Plymouth and North Cornwall opened as a through route in 1876.

Whilst many of the South Western lines were axed in the 1960s, this particular stretch was kept open to transport ballast from Meldon Quarry for use on all parts of the British Railways Southern Region.

Meldon Quarry and the stretch of line from Coleford Junction to the Quarry were subsequently sold to Aggregate Industries whom together with Devon County Council, Dartmoor National Park and RMS Locotec formulated the concept of the Dartmoor Railway. The concept was to create a Community Railway that would enable visitors to access and enjoy the National Park without the use of a car.

In 2008 the Dartmoor Railway was acquired by Iowa Pacific Holdings, with aim to increase freight usage of the line and re-introduce passenger services from Okehampton to Exeter. Whilst these have not yet come into fruition the Dartmoor Railway CIC is committed to finding a solution and is currently

In the meantime Heritage Services have been running over the past ten years and will continue to develop in a positive direction following the fantastic success of special events such as the popular Train to Christmas Town which runs over the festive season. 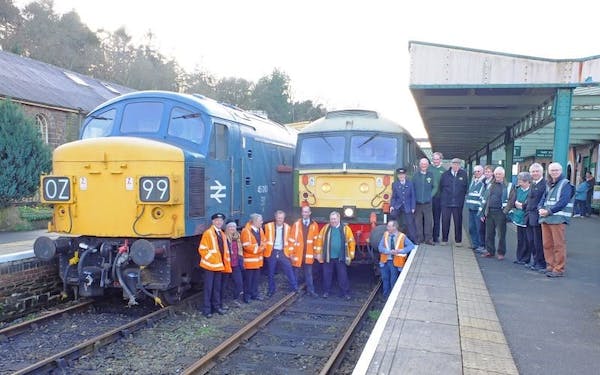 Join us! The volunteers at The Dartmoor Railway are a small but mighty addition to the team. There are several sections whom get stuck in across all areas of the railway. We are extremely lucky to have their support and appreciate everything that they do. With the increase in traffic and traction and the development of new and exciting facilities across the railways sites we offer an enriching and enjoyable experience.

If you enjoy getting hands on with the rolling stock the carriage and wagon team might be right up your track. Or if you fancy yourself as a bit of a handyman (or woman) The Saturday maintenance team could be the fun your looking for..

If you have railway operation knowledge, maybe you’re an experienced mainline driver, guard or signalman and have some spare time we would love to hear from you!

Youngsters! Don’t be shy, we have a great open-minded team here and would love for you to get involved. Learn something new, meet new people and have some fun.

If you are interested in volunteering with for more information please drop us an email detailing you interests and experience and someone will contact you.

Go on, do something different today, join the railway family.

By clicking or navigating the site, you agree to the FareHarbor Terms of Service and Privacy Policy, and to our partners’ use of data related to your use of our website. Like other websites, we use cookies and similar technologies to collect that data in order to deliver personalized advertising based on your interests. See Our Use of Cookies to learn more about your rights and our partners. Dismiss